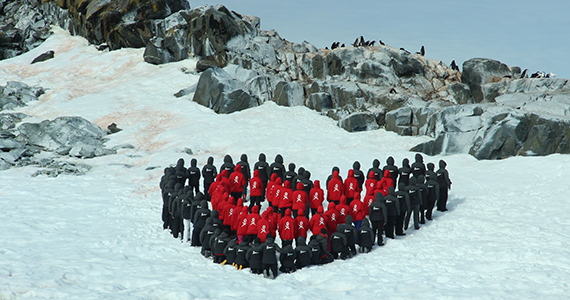 Emilse Anabella Palacios joined other women scientists as part of the Homeward Bound expedition to Antarctica.

My relationship with Rotary began as a Rotary Youth Exchange student and member of a Group Study Exchange. Later as a Rotary Peace Fellow at Duke University and University of North Carolina at Chapel Hill in 2009-11, I began a process of learning about leadership that will continue throughout my life.

On the last day of 2018, I set sail for Antarctica with 89 other women scientists from 26 countries as part of Homeward Bound, an initiative that aims to heighten the influence and impact of women in making decisions that shape our planet. On board the former research vessel MV Ushuaia, we represented the largest female expedition ever to that continent.

I was completing a year-long program designed to strengthen the inner capacity of women to lead change and impact society. This new style of leadership emphasizes empathy, respect, and vulnerability. It also accepts that we make mistakes, but that we can embrace and learn from them.

Women at the South Pole

The trip allowed me to be part of a historic shift increasing the visibility and work of women at the South Pole. Research at the pole remained male-only through the 1960s, partly on the argument that facilities did not exist to accommodate women. But we are finally breaking this “ice” ceiling.

Antarctica is also special to me because it is a scientific preserve, a continent with no owner or country. It is regulated by the Antarctic Treaty signed by 53 countries that bans military activity. This environment of peace is a Rotary dream come true.

But Antarctica also suffers from climate change. While there, we experienced glaciers retreating into the sea and penguins suffering in the rare heat of a summer day. We heard humpback whales that must make migrations of thousands of kilometers to feed in the summer. We teared up when we saw a pod of 17 orcas traveling together and feeding their babies.

Climate change undermines human rights in parts of the world. Those who have contributed least to the problem suffer the worst impacts. Rising sea levels create harsh storms that, coupled with poor infrastructure, threaten the safety of vulnerable families in their path. Droughts are combining with poor farming practices to threaten entire food systems, causing small farmers to struggle to feed their families. This is definitely not “fair to all concerned.”

Rotary has taught me to live true to my values and live the ideal of Service Above Self. In Antarctica, I reflected on the need to inspire others to make positive change. If everyone makes even one small change, we collectively can have a big impact. Men and women, we are stronger together, and by working to preserve our planet, we are working to save ourselves.