Family of Rotary helps after wildfire 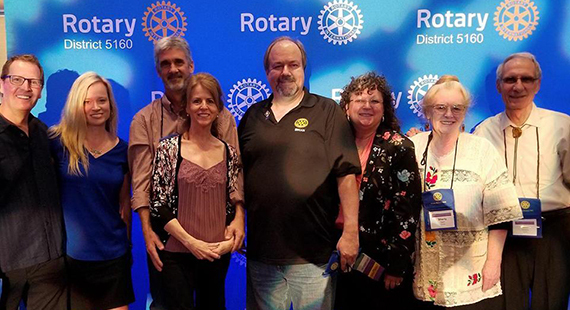 Pam Gray and her husband, Brian, (third and fourth from right) at the District 5160 conference in 2018.

I grew up in a small family. My parents were both only children – that means I have no aunts, uncles or first cousins. As a child, my entire immediate family could sit around a dining table set for eight. My four grandparents, my parents, my sister and I filled the table. There was no additional ‘kids’ table!

Fortunately, my dad was a member of the Rotary Club of Paradise. Our Rotary family consisted of five families, all of similar age, so we had plenty of celebrations with this extended family growing up.

While my biological family grew as I became an adult, so did my Rotary family. Our club had more than 100 members when I joined and there was always something going on. 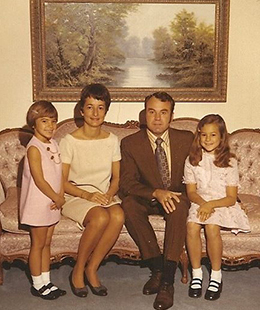 Club members took action when our home was evacuated in 2008 due to a wildfire. Members went to our home, secured our vehicles and motorcycle, took our animals to their homes and saved our computer with countless family photos stored in memory; all of this while we were at the Rotary International Convention in Los Angeles some 500 miles from Paradise.

After serving as club president, I began working at district jobs which added to my Rotary family tree. Serving several district governors provided tools, and many relationships, that were key to serving as District 5160 Governor in 2014-2015.

Brian and I were involved in a motorcycle accident shortly before the end of our governor year, following a ride for polio eradication. Rotarian friends cared for us and took over Rotary jobs that we were unable to fulfill.

My Rotary path continued on serving our club, district and zone. Again, my Rotary family tree expanded exponentially. The result benefited not only me, but my Rotary club and other clubs in the area.

Then the Camp Fire began on 8 November 2018 and raged for 17 days leaving much of our beloved Paradise as piles of rubble and ash. In less than 24 hours, Rotarians from Santa Rosa, California, were on task to help Paradise. They established a GoFundMe page for our club’s foundation and came to see us sharing their knowledge of rebuilding after a major fire.

Rotarians, not only from neighboring districts, but neighboring states delivered supplies and provided cash aide and gift cards in the tens of thousands of dollars within the first week.

While serving as district governor and visiting 71 Rotary clubs, my Rotarian friends came to know me as “Pam from Paradise” and I chose to share my love for the family of Rotary. Considering all Rotarians as my family, they are returning the sentiment by helping Paradise where they can and providing encouraging words during our darkest days.