Lessons from a new club in Nuremberg

It is beyond question that Rotary club charters are something special. The fact that the latest Nuremberg addition to the Rotary family was personally welcomed by RI President-elect Mark Maloney is even more memorable for the new members. But the composition of the club is also extraordinary: It consists of 42 committed members – 24 women and 18 men, with an average age of 42 years. Sixteen of them are former Rotaractors. The aim of the club is to connect people, hence the name: Rotary Club Nürnberg-Connect.

Helmut Rauscher, a past district governor and member of the Rotary Club of Nürnberg-Sebald led the effort to found the new club and has done real pioneering work for the extension of Rotary in the Nuremberg region over the past three years. Although there are twelve clubs with about 850 members in the region, there is a need for additional clubs to take advantage of the growing number of professionals in this booming region.

The idea of the new club is to put commitment to projects before meeting attendance – in line with the new international guidelines of Rotary. Participation in projects is counted toward attendance. Members may also attend meetings online. But don’t get the new members wrong: As flexible as the club may be in terms of presence, the focus on joint implementation of social projects is paramount.

Although other clubs in the region initially were unsure they liked the idea of a new club, Helmut Rauscher was able to get a great deal of acceptance by convincing them of the value of creating new Rotary clubs as a starting point for professionals who are enthusiastic and committed to the Rotary idea. The new club is now well received, not in the least because the Nürnberg-Connect club takes an active part in the other clubs’ efforts to positively influence the public perception about Rotary in the region. 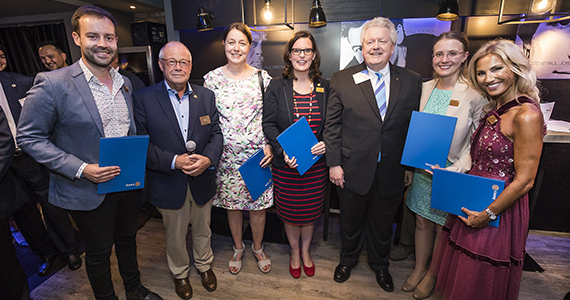 After a first meeting in April, the club received its charter in September, on the same weekend the International Rotary Institute took place in town. Maloney and his wife, Gay, who joined the club charter ceremony after the first day of the conference, congratulated each member of the new club and personally attached their member badges. Maloney also emphasized the club’s status as a role model:

“Rotary Nürnberg-Connect stands for a new generation of Rotary clubs – the kind of clubs I consider necessary so that Rotary can continue to grow.”

In her thanks to Helmut Rauscher, new club president Sandra Bührke-Olbrich clarified the future path of the club:

“Together we will interpret the Rotary idea in new ways, design and start new projects and make new friends. In this process, we will be guided by our Rotary values and the idea that is expressed in our club name.”

After an entertaining and humorous evening with good conversations among friends and families, the ceremony continued at the institute the next day. In front of about 400 Rotarians from all over Europe, the club was awarded the official charter certificate – another special moment.

After all the words of praise, it is time now to grow together as a club, to get the first projects off the ground, to get active in the region, and to contribute to the development of the Rotary family – both internally and externally. All in the spirit of the club name: Rotary Club Nürnberg-Connect.