Reaching the unreached in India 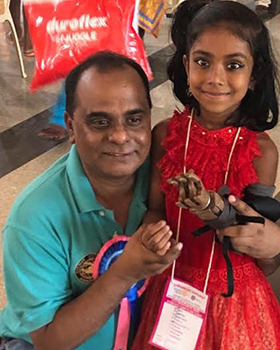 K V Mohan Kumar with a recipient of a prosthetic hand.

A boy who had lost both his hands in an electrocution spoke to a service committee meeting of our club. His parents left him after the electrocution and a local nongovernmental organization was taking care of him. This boy was our first recipient of a prosthetic hand. And seeing his joy after he started using a pen to write for the first time, we have never looked back.

We were first approached by The Ellen Meadows Prosthetic Hand Foundation at one of our district events while I was secretary of my former Rotary club. They were looking to partner with Rotary clubs in Bangalore, India, to work on prosthetic hand projects. It was quite an interesting prospect and we immediately agreed to a partnership.

I happened to meet Rotarian Jim Yoder, vice president of The LN-4 Hand Project, at the 2012 Rotary Convention in Bangkok, Thailand. We discussed the possibilities of extending our partnership to the needy through our outreach programs in India.

No cost to recipients

Ernie Meadows, an industrial engineer, designed the inexpensive, below elbow prosthetic hand in memory of his daughter Ellen, who died in an automobile accident at the age of 18. In 2006, Ernie gave the LN-4 (LN is short for Ellen) to the Ellen Meadows Prosthetic Hand Foundation specifying the hand be provided at no cost to recipients. Since 2007, over 45,000 hands have been provided free to recipients in more than 92 countries.

I have traveled across India speaking at district conferences, district assemblies, and president-elect training seminars working collaboratively with Rotary clubs and NGOs in India to provide more than 16,000 of the prosthetic hands.

A few of the results:

As an ambassador for the program, I helped search for potential beneficiaries throughout South Asia. One of our greatest assets in Rotary is the ability to mobilize our volunteer network. We conducted one day camps in every corner of India where recipients were fitted for prosthetic hands. Rotary and Rotaract members and their family offered their time and service. When a club got trained, it trained other clubs, spreading the movement.

In the 2018-19 Rotary year, 46 camps were conducted resulting in over 6,000 beneficiaries of prosthetic hands.

A project of this scale addresses all of the priorities in Rotary’s Action Plan. Our efforts have been featured in at least 300-400 magazines, newspapers, television channels and radio stations bringing increased visibility to Rotary.

I have met so many amazing people and have been able to see so many places that I would not normally get to see through this journey. I thank Rotary and all the people who participated with us in transforming our world.