Rotary makes it a small world after all 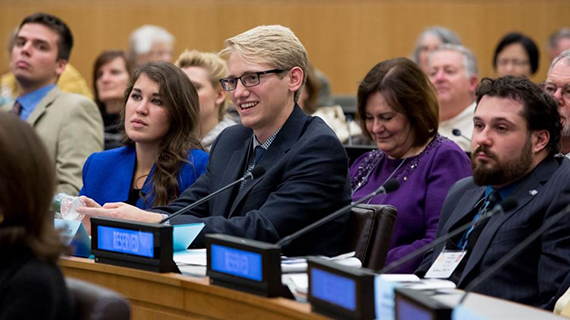 Jordan Koletic, left, and Robert Smayda Jr. at Rotary Day at the United Nations in 2014.

In 2015, I was working at one of the largest Fortune 500 banks in the United States when I read an article on our internal website about a team member traveling to eastern Africa. I found the story intriguing, and reached out to her for more details about the trip and to see if it had a connection with Rotary. But at the time I did not hear back.

Shortly thereafter, I began attending Toastmasters International meetings with a colleague, Robert, from the technology division. We both enjoyed our weekly dose of public speaking, and I learned that he was a young professional looking to become more involved in his community. I shared with him what Rotary clubs had been doing in the Charlotte community, and also told him about our international work. And he expressed interest in joining.

I had put the intranet story to the back of my mind until later that year, when I received my copy of The Rotarian. One of the articles covered Rotary Day at the United Nations and contained a photo of a young lady attending the event and a doppelganger of Robert sitting next to her. In my next Toastmasters meeting, I told Robert about the article and he said it was indeed him and his girlfriend (now wife), Jordan. He went on to tell me about her interest in women’s health issues in east Africa and how she had spoken about the issue at the event. 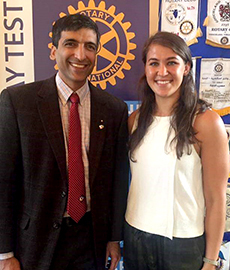 Kamlesh Chandan and Jordan Koletic at a Rotary club meeting.

Two months later, Robert asked me if he could forward my contact information to Jordan, who worked at the bank in the analytics group. She called me, and we talked about her east Africa project. That began a year of conversations. I was shocked she was the same person I had read about on the bank’s website, and I connected Jordan with local Rotary leaders. I was convinced The Rotary Foundation could help her with her interest in pursuing a master’s degree in advanced peace studies at the University of Glasgow in Scotland, with a focus on regions affected by conflict.

The chain of events impressed upon me how small our world can be. You never know when the person sitting next to you could be the next Nobel Prize winner, the individual that cures cancer, or just someone who wants to make a difference in the world.

My Rotary club and District 7680 (North Carolina, USA) applied for and received a global grant to fund a $30,000 scholarship for Jordan, who completed a one-year peace studies program in Human Rights and International Politics at the University of Glasgow in 2017. She is now working for the Bureau of Democracy, Human Rights, and Labor within the U.S. Department of State. We stay in touch, and Jordan is considering applying for a Rotary Peace Fellowship.

That day made me a believer in 2019-20 Rotary President Mark Daniel Maloney’s theme, Rotary Connects the World.

Jordan Koletic contributed to this article