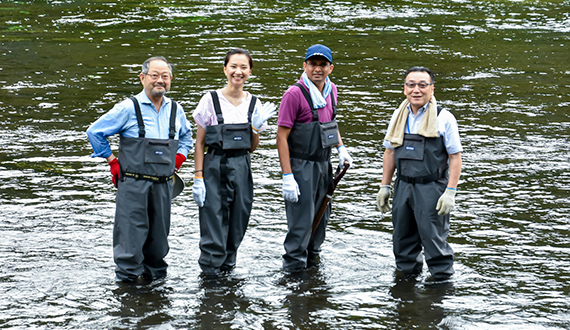 Alumni of the Rotary Yoneyama Memorial Foundation work with Rotary members on a clean up project.

As a regional communications specialist for Rotary International, I get excited when I hear stories about students who have had their lives changed by Rotary scholarships. Lasitha Eriyawa, a Sri Lankan, came to Japan in 2001 to pursue his college education. During his senior year, he received a scholarship from the Rotary Yoneyama Memorial Foundation, a program administered by an independent foundation named after Umekichi Yoneyama, the Father of Rotary in Japan.

Through this program, Rotarians in Japan have supported more than 20,000 international students in the past half-century. More than half of them are from China, South Korea, and Taiwan. But the foundation has accepted students from around the world. One thing that is unique is that a Rotary club in Japan is assigned as the “sewa club” (host club) for each scholar and that club members provide comprehensive support so that the students can focus on their studies.

Today, Yoneyama alumni are taking leadership roles in various fields. Many of them participating in Rotary service. Lasitha is one of them. While working as a team leader in the software engineering division of a semiconductor manufacturing company in Japan, he started a project to support a government hospital in a remote area of Sri Lanka. To collect the funds, he served tea made from top-grade leafs rarely available anywhere but in Sri Lanka and asked for donations at Rotary meetings in Japan.

Lasitha told me there are several things he thinks Rotarians should know about the impact of Yoneyama alumni.

The Rotary Yoneyama Memorial Foundation, as well as the legacy that Rotarians in Japan have built with respect to the Father of Rotary in Japan, are gems that are sometimes overlooked. I encourage you to share this story with anyone who is considering working with Japanese clubs or who is interested in pursuing higher education in Japan. You can read the full story about Lasitha and the impact of Yoneyama on the Japanese blog.(In Japanese)