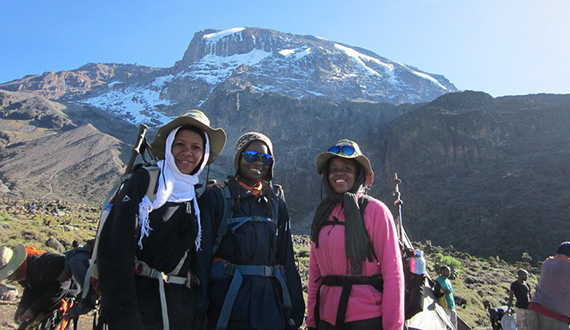 Kisa mentors on a climb of Mount Kilimanjaro with Curt Harris in 2018.

Although I joined Rotary in 1997, it wasn’t until I had the opportunity to travel to Tanzania to climb Mount Kilimanjaro as a Rotary-sponsored fundraiser three years later that I really felt I had become a Rotarian.

This was my first opportunity to visit a developing country and see first-hand what poverty looks like. It is quite an eye-opener. I also got to observe some of the great things that Rotary was doing in the area. On that trip, our team of 11 climbers raised nearly $300,000 to support the Selian Hospital in northern Tanzania. Three years later, I returned with a smaller team, raising $125,000 to help build Selian Hospital’s new sister facility near downtown Arusha. 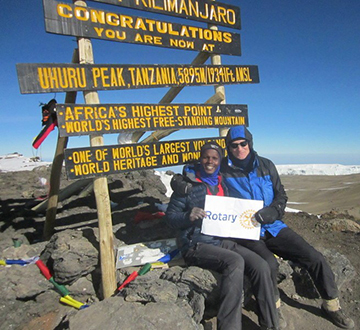 Curt Harris, right, displays the Rotary logo at the peak of Mount Kilimanjaro during one of his five climbs.

I have now climbed Kilimanjaro five times, with plans in the works to return a sixth time, either this fall or in 2021, depending on the state of the COVID-19 pandemic. (In fact: I’m still looking for three more people to join our current team of seven – so, if you are interested, contact me (see below)

Some might think climbing Kilimanjaro five times a little strange, and they might be right! But the last two times, in 2016 and 2018, I led teams that did something truly special. On each of these climbs, we were joined by some young Tanzanian women who were graduates of the Kisa Project, a program sponsored by AfricAid. It provides robust mentorship opportunities that help secondary school girls learn skills like confidence, leadership, and resilience in order to succeed in school and beyond. In fact, 97 percent of Kisa scholars continue to tertiary education, compared with a national average in Tanzania of 3 percent. It’s a remarkably effective program.

The young women who joined us were so excited to be part of our climb. Very few women in Tanzania get to climb Kili – they typically cannot afford it and the culture discourages it. We were also excited for them to join us, because it gave us all a chance to hear firsthand the stories that led them to become the confident, successful, university-educated women who now serve as Kisa Project mentors today.

One of the girls on our 2018 climb was named Ellie. Over dinner one evening, she shared that when she was young, her dream was simply to go to school. Ellie was the youngest of nine children with a single mother in rural Tanzania. Girls in her village didn’t go to school. They stayed home, did chores, hauled water, got married, and had many children.

But Ellie had this dream. She snuck off to school whenever she could. Sometimes the headmaster would send her home. If her brothers found out, they would beat her. But she would always go back. Finally, the headmaster and her family gave in, and Ellie could go to school. She graduated, went to college and now is a Kisa Project mentor. She even started her own nonprofit, Her Journey to School, through which she works to convince parents in Tanzania to educate their girls.

Twenty years ago, my Rotary club in Evergreen, Colorado, had invited Ashley, a local 15-year-old girl, to talk about an idea she had for a nonprofit. Our club gave her the chance to speak (and maybe a little confidence), then passed the hat to raise about $900. She used that money to start AfricAid.

Two decades ago, this one small grant from a club halfway around the world helped start a process that has since mentored 10,000 girls, giving them the skills to lead the lives they choose and create a ripple effect of change in their communities.

As Rotarians, we do a lot of good. But, sometimes we don’t always realize the long-term impact of our work. So let’s all remember – especially right now – that even a seemingly small effort can have such a major impact in your local community, or even half a world away.

Find out how to support mentoring opportunities for girls in Tanzania, or get information on joining Curt on his climb, by sending an email to info@africaid.com or by sending a tweet to @AfricAid.