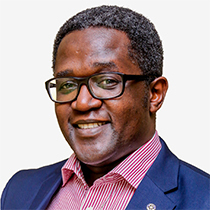 I gravitate naturally to statistics despite the negative feelings some people have about them. I think that information is the fuel that our world runs on and without it our systems will sputter, stall, and shut down. That is because statistics are significant in decision making.

When I joined the Rotary Club of Nairobi East, Kenya, 19 years ago, I was told that good Rotarians were defined by the regularity of their attendance, the frequency of their gifts to The Rotary Foundation, and most importantly by their ability to introduce new members to the club.

In my quest to be a valuable member, I turned to statistics as a way to demonstrate the credibility of Rotary to family, friends, and neighborhood skeptics. I learned all the important stats by heart and would spit them out at the slightest provocation. If someone happened to notice my membership pin, they would get a barrage of information enough to weigh down even the strongest weightlifter.

Only a bolt of lightning would get my victims to wake up again by the time I was done talking. I thought I was promoting the club but instead I was boring them to death.

Looking back, it shouldn’t have been a surprise to me that my recruitment efforts led to naught. Not a single person that I targeted with my facts and figures joined the organization. Yet other members invited guests to our lunches every week, and these guests eventually joined our club within a month or two.

One day I got a call from a business journalist who wanted to discuss the results of a survey that my company had recently published. This was not unusual because in those days I worked for a research company and media executives regularly called me for insights and information.

The human and relatable stories we tell are the ones that fire emotional triggers and create the special connections we have in Rotary.

We met at a popular restaurant and after trading personal stories, I casually brought up a Rotary event I had gone to over the weekend where we’d commissioned a sports arena in a school that was situated in a nearby slum. That story captured her imagination so much that by the end of our meeting she asked for an invite to my Rotary club. She eventually became the first person that I successfully introduced into membership without having to twist their arm.

The business journalist I speak of is none-other-than Carole Kimutai, who went on to become one of the most celebrated past presidents of the Rotary Club of Nairobi-East.

I learned something from that experience. Nobody really cares about statistics and data; they are more interested in what the experience means to you and me. People tend to follow the passion and the feelings that they see in us, which creates an emotional connection that is more powerful than a rational thought process.

I also described those ripples that oscillate in my soul whenever I see happy faces of needy children who receive new books or toys, and the joy of mothers who bring their children to medical camps for free health checkups.

The results speak for themselves. In my first three years of spewing statistics, I didn’t bring in any new members. In the following 16 years, I have introduced over 30 new members, and together with Jim Wilson and George Mathenge, launched a new club with over 35 members. This club has gone on to form another club with a similar number of charter members.

The human and relatable stories we tell are the ones that fire emotional triggers and create the special connections we have in Rotary. Whether it is through face-to-face interaction, on social media, or even when presenting a speech to a large audience, we can make our clubs appealing by defining and articulating what is truly meaningful to us.