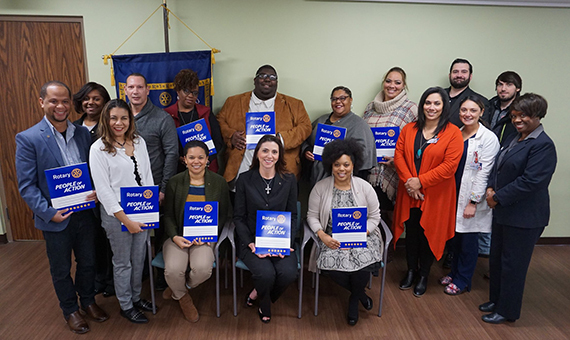 New members of the Sunrise after Dark satellite club during an induction ceremony earlier this year.

By Tracey Antee, past president of the Rotary Club of Opelousas Sunrise, Louisiana, USA

During my tenure as club president in 2019-20, I made a goal of starting a satellite club that would meet after regular business hours, hence the name Sunrise after Dark. A young professional group in the community just ended, and it seemed like the perfect opportunity to reach out to these individuals and invite them to join Rotary, within the ease provided by the satellite format.

Satellite clubs require fewer initial members to charter, and remain connected to their sponsoring clubs while they remain in this transitional phase toward becoming their own regular club. We were also excited to add their diversity to our membership. Sunrise after Dark ranges in age from 23 to 55 years old. Their inclusion made our collective membership more even in just about every demographic.

Our first satellite club informational meeting had almost 30 participants and we were quickly able to sign up 21 members to receive a charter in November. Establishing the satellite club was a simple process, and we received a lot of support from our District 6200 leaders.

We were able to recruit easily by initially identifying a few people in the community that had a large network and asking them to invite people to the informational meeting. People are more likely to say yes to someone they know and engage with than a stranger. This method of recruiting new members has been very successful.

The satellite club meets bi-monthly, once for a general meeting to listen to a speaker and a second time at a local bar or restaurant for networking. Prior to COVID-19, these networking meetings were well attended and created the opportunity to introduce the club to potential new members. Sunrise after Dark has continued to meet virtually twice a month.

The members of Sunrise after Dark were surprised when we shared our club’s work over the decades. This helped motivate them to join in serving our community in a meaningful way. Using the People of Action materials available through the Brand Center, we showed prospective members how they could take action by joining the club, which made the difference for many of them. We recognized that people were looking for ways to volunteer and be People of Action in their community but didn’t know how. Sunrise After Dark gave them that opportunity.

Within the first three months, this group quickly stepped up and started their own service projects, partnering with nonprofits in the community to support diaper drives that created a new diaper bank for children in foster care. They also launched anti-bullying campaigns.

At the beginning of COVID-19, we basically had to push the pause button like many other Rotary clubs. The uncertainty surrounding COVID-19 and what would happen next left us in limbo. But after about four weeks we started meeting again via Zoom.

This was a game changer! We were able to engage with members that were struggling to make the 7 a.m. meetings and we had great participation because we missed seeing each other. It was much easier to send a friend or colleague the Zoom link and ask them to join us while they enjoyed their morning coffee. We ended up recruiting five new members and inducting them in July.

We continue to grow by reaching out to professionals in the community that normally couldn’t make a physical meeting and giving them multiple times to meet, either at 7 a.m. with the Sunrise club or 6 p.m. with the After Dark club. We are adding another five new members in September.

We found the flexibility of both the satellite club format and virtual meetings a great way to increase the diversity of Rotary in our community and add new members. Learn more about flexible club formats.