The power of story to build a better future 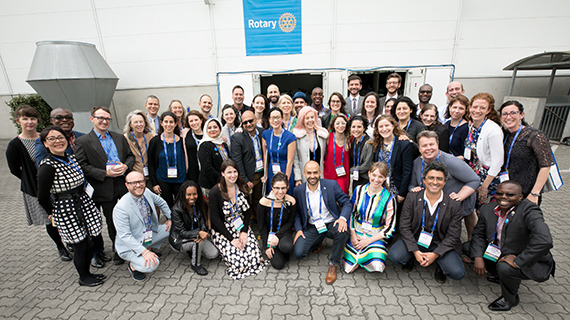 Earlier this year, I had the privilege of visiting Hamburg, Germany, to present a series of talks at the Rotary International Convention and Peace Symposium. I always look forward to the symposiums and the chance to reconnect with other Rotary Peace Fellows. The event underscored for me how much better it is to hear people’s stories in real life, in person, as opposed to on the news.

That’s not a new idea – in fact it informs all the work we do for our annual National Storytelling Festival (known as the largest and most prestigious storytelling gathering in the world) – but it’s an important one. The first session I led focused on connecting storytelling and peacebuilding, and how the stories we share today help us envision a better tomorrow. Together, we’re all shaping the story of our future world.

Stories are also an important tool we use to build relationships with one another – to understand people who come from places we don’t necessarily know very well, and to keep our own homes alive in our memories when we’re far away. In the session, I invited everyone to share their own stories of what had brought them to the event.

In Hamburg, I shared a room with my friend Eduardo Costa, a Brazilian peace activist who grew up in the Amazon rainforest. He’s an economist who has encouraged me to think about my own work on a global scale. He and his family are currently living in Canada, where he’s finishing his PhD in peace and conflict studies. If he were to return to his home country, he would be very concerned about the risks that currently face indigenous leaders and environmental activists. The risks he has to worry about are much more common worldwide than you might imagine.

Another colleague of mine who works for human rights was recently imprisoned and threatened. But it’s not all bad news. On the other side of the spectrum, a Jewish American who lived in Ramallah (in Palestine), a predominantly Muslim city, talked to me about how the community where she lived felt like the safest place in the world. Her community protected her from harassment and other forms of hassle. That’s not likely what you would see on TV.

On Sunday, our free day, a group of us decided to take a ferry trip. I set off with Yuri (who’s from Israel), Sandra (who’s Brazilian), and Anne, a Danish woman who’s living in Berlin. Anne has been working with Syrian refugees, teaching them how to code. Melissa, who also works with refugees, came along, as did Merlin, who works in Somalia. I was pleased to catch up with Jessica Trijsburg, who I knew from our time as students at the University of North Carolina. Now she lives in Australia, and is ISC’s partner for the videogame that we’re currently developing.

Later that night, my head still buzzing with the day’s activity, I was unable to sleep. I wandered outside and over to the Turkish café directly opposite from the place I was staying. I was in the mood for a kebab. Even though it was after midnight, there was still plenty of activity on the downtown streets of Hamburg. The shops were still open, and people were coming out of the dance clubs. Old men were smoking cigarettes and chatting intently on the city benches. I sat outside at the one tiny table that was available outside the café near two other men. It reminded me of central London. It felt like home.

A Ghanaian man who grew up in London overheard me speaking English and struck up a conversation with me and a younger Egyptian man who was sipping tea with a friend (who was busy on his cell phone). We talked about where we were from and how long we had been in Germany. The Egyptian man told us that he was in process of seeking political asylum. The Ghanaian man got very excited when I explained what I was doing there in Hamburg presenting at the peace symposium. He even asked me to talk about it so he could share it via a Snapchat video he made on his phone. Somewhere out there, there’s a video of that moment!

I’m proud to represent an organization that works hard to connect people through story. It’s important to help people to realize that home is more than just a physical place or location, but something that goes much deeper into our personal stories, hopes, and dreams. In this recognition, we help create a future that opens up again with peace and understanding – and that is something to celebrate.

Adapted with permission from the International Storytelling Center blog