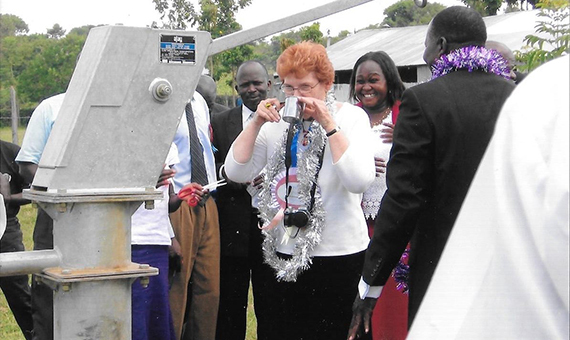 Joi Burton takes a drink from a new well during a trip to Kenya. A grant project between District 5790 and Homa Bay, Kenya, provided the well.

By Joi Burton, International Service Chair for District 6170 and member of the Rotary Club of North Garland County, Arkansas, USA

I have always had a dream of going to Africa. Soon after I joined Rotary in 1991, I noticed an article in The Rotarian that a Rotary club from Eugene, Oregon, was going to Kenya to work on some projects. They were inviting people to go with them, and when I contacted them they accepted my offer. We visited several Rotary projects and a Rotary Club in Nairobi. That was the beginning of a long and productive relationship between my club at the time, Arlington South, Texas, and the people of Kenya that demonstrated the impact even a small club can have through the magic that is Rotary.

I enjoyed the Kenyan people so much I decided I wanted to go back and live with them for a few weeks.

A fellow Rotarian introduced me to his friend from Bondo, Kenya. The friend said if I was willing to go to her village, she would make the arrangements and have a relative, Moses, pick me up at Nairobi airport, and that I could stay in her house.

Before I went, the Rotary Club of Arlington South gave me $500 to do a project in her village. It took a day’s drive from Nairobi to reach the village. We arrived at night and were met by all of the villagers, each with a lantern. This was an area with a few houses, several huts, a school, and a church, but no electricity, no water and several miles from the nearest road.

The next day I told Moses I had “a little bit of money” from my club and asked if there was something they needed. They told us they needed concrete to replace the floors in the school, as the children were getting their uniforms dirty from having to sit on the floor all day. Moses and I went to the nearest town and purchased gravel, sand, and cement. After it was delivered, the villagers completed the floors in all the rooms. 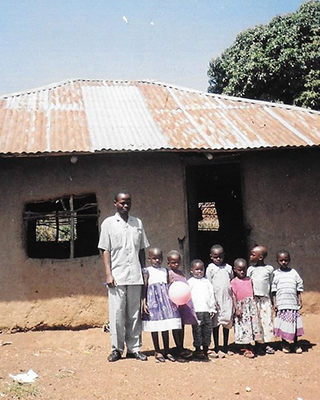 Each weekend, Moses would come from Nairobi to see if I needed anything. The second week I again let Moses know I still had “a little bit of money” and asked if there was something else they needed. They wanted glass to replace windows of the school, all of which had been broken. We bought large plates of glass. They were able to cut and fit all the windows of the school.

The third week, Moses informed me the villagers wanted some metal paint to paint the tin roof of the school as it had rusted. Having some of that “little bit of money” left, we purchased paint and brushes and they were able to make ladders with sticks and rope and painted the roof.

On the last week I approached Moses to let him know I still “had a little bit of money” and asked what they needed. They said they needed books for the school. They had only a few. We were able to go to a larger city, an overnight trip, to purchases some text books. We were able to purchase one teacher textbook and one student textbook of every subject for every grade kindergarten to eighth grade. With our last few dollars we purchased two cases of chalk. We had the back of the pickup truck completely filled with school books. What a wonderful time the students and teachers had as we drove up into the school yard. We later learned they were completely out of chalk.

This experience built the foundation for other efforts. The Texas club and Rotarians in the district went on to put together other grant projects to benefit the people of Kenya including two grants that provided wells for drinking water with the Homa Bay club. Several members made their own visits to Kenya after that initial outlay of $500.

What a difference one small, 30-member Rotary club can make with “a little bit of money.”

Learn more about putting together a service project in Rotary