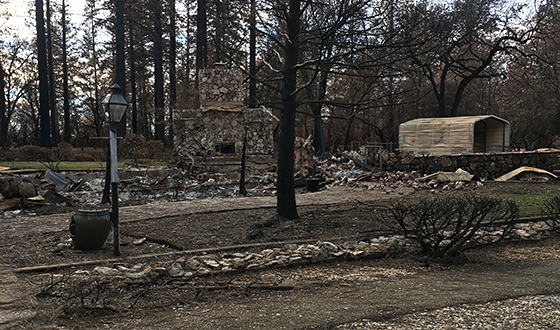 The Gray’s home after the fire.

By Pam Gray, past district governor and member of the Rotary Club of Paradise, California, USA

While 77 days may seem like a long time, it has been a flash for those of us who were living in Paradise, California, and the surrounding foothills on 8 November, 2018.

My husband and I are members of the Rotary Club of Paradise. I was a District 5160 Governor during the 2014-15 Rotary year, and my husband, Brian, is currently club president. Brian was known as the “First Dude” as we traveled to visit 71 Rotary clubs the year I was governor.

The “First Dude” and I made it out safe along with our Saint Bernard and two cats. While our home is gone, like those of most other Paradise Rotarians and residents of the Ridge, the main building of my funeral home is standing. This is wonderful as we had several folks in our care and we were able to get them to my Oroville location so the families could go ahead with various services they had planned for their loved ones – on just 18 January, 2019.

Brian’s business did not survive even though it was standing when we left town. 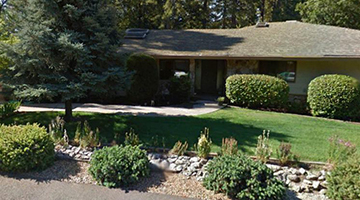 Their home before the fire.

We did not leave our home until the afternoon of 8 November because we were awaiting the notification that our ‘zone’ was being evacuated. Zones were developed a decade ago after an evacuation resulted in traffic so bad people could not get off the Ridge and just stayed. The final notification I received was at 9:18 a.m. By noon, our son-in-law was calling from Flagstaff, Arizona, telling us to get out immediately. He was watching the news; we had no news. We walked through each room and said goodbye to our home and to our “stuff.” We told our home she had been great and we were sorry we could not stay to keep her safe.

Typically it would take about 10 minutes to get to the next town. We were fortunate on 8 November we made the trip in an hour and 20 minutes when earlier in the day it took people eight hours.

As fate would have it, the Zone Institute was the following week and Brain and I decided to attend after our very gracious hostess offered to keep the pets while we traveled to Reno, Nevada. It was good to be among so many Rotarians.

Sonoma Rotarians set up a GoFundMe page the day after the fire that will benefit the Paradise Rotary Foundation. We were able to make some great contacts that are of great benefit to the Paradise Rotary Foundation. We are very grateful for our Rotary family. In between sessions, we spent the time returning phone calls from around the country. We made dozens of calls each day.

The following week, we had a surprise birthday party for our Exchange Student, Val, from Columbia. Val fled Paradise High School with her host brother (an exchange student to Brazil last year) and made their way to Chico. The youth exchange committee then got her to Burney, California, more than 110 miles northeast of Paradise. During the days since the fire began, the Rotary Club of Vacaville Sunrise about 200 miles south of Burney agreed to host Val for the remainder of the year. While Val desperately wanted to remain with her first host family, it was decided that would be impossible. Three generations of her host family had lost all of their homes and businesses. It was sad to let Val go.

Brian was able to find a place for our Rotary club to meet and we began meeting just one week after the beginning of the fire. We had two meetings before the fire was 100 percent contained on 25 November 25, some 17 days after it began.