Why attend the Rotaract preconvention? 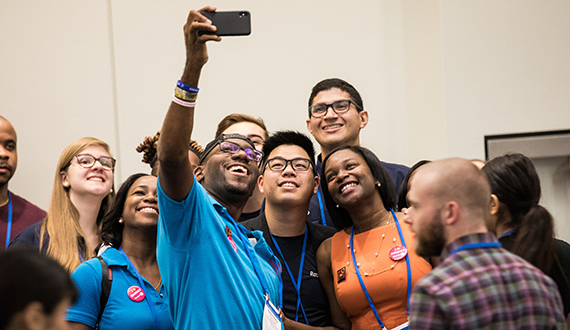 You don’t have to be a Rotaractor to enjoy the Rotaract Preconvention. In fact, there are plenty of reasons for Rotarians to attend, as well. Perhaps one of the best is getting to know this vibrant part of the Rotary family and building connections that will welcome these younger members into the Rotary fold.

I joined Rotaract in 2005, and became a Rotarian in 2016. I’ve attended both the Rotaract Preconvention and Rotary Convention over the past six years, traveling to Lisbon, Sidney, Sao Paulo, Seoul, Atlanta, and Toronto. During each Preconvention I learned more about Rotaract, went home motivated to try new ideas, and gained lasting friendships.

In Sao Paulo, we attended an event in the Sambadrome, where we saw local Samba groups. I was there by chance with a group of Taiwanese Rotaractors. At one point, we met Taiwanese Rotarians and posed for a group picture. Every year, I see them at the International Convention and we have developed a very close friendship over the years.

I believe Rotaract is one of Rotary’s most important programs. When I attend a Rotaract Preconvention, I am reminded of the strength, the positivity, and the excitement that kept me active during my time in Rotaract. I feel welcomed and included by the way Rotaractors interact with everyone. Rotarians who attend will also feel this warmth and enthusiasm.

Many of the sessions at the preconvention deal with the connection between Rotaract and Rotary, and how to make it easier and more desirable for Rotaractors to join Rotary. If we want members of Rotaract to imagine a future in Rotary, we need to talk to them about our mutual wants and needs.

By attending, you will show your support and interest. We have an ambitious goal, set by President Barry Rassin, of doubling the number of Rotaractors and Rotaract clubs worldwide. As he said in Toronto, “We need younger members, we need younger leaders, if we want Rotary to stay strong.”

I look forward to attending the Rotaract Preconvention in Hamburg from 31 May  to 1 June, and hope to see you there! You may be inspired to start your own Rotaract club or to invite an existing Rotaract club to join you in implementing a project.