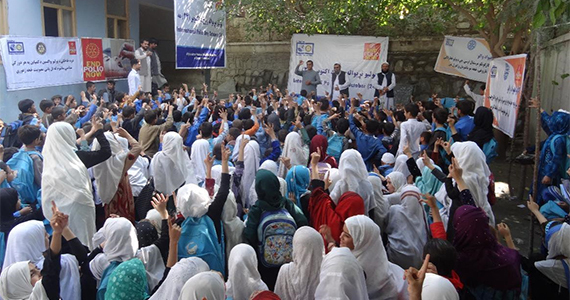 During a three-day period encompassing World Polio Day, 24 October, a group of students in Jalalabad, Afghanistan, conducted a polio awareness campaign that was able to reach many of their peers with the message about Rotary’s work to eradicate polio. While many clubs worldwide held activities around World Polio Day, this one was especially exciting to me because these students are part of a program known as Afghan Young Connect (AYC) which I have been involved with since 2008.

AYC is playing an important role in advancing our polio eradication work in Afghanistan.Banners with messages in English and in local languages were in prominent display in each of the schools where general assemblies were held. AYC trainers and students made presentations about the importance of eradicating polio. The effort was led by Abdul Qaum “Almas” Past President of the Rotary Club of Jalalabad, who is the in-country director of the AYC program, sponsored by my Rotary Club of La Jolla Golden Triangle.

The reach of this polio awareness campaign has been deep. A typical public school in Jalalabad has in excess of 5,000 students. Not only did the students in the 18 schools visited experience the campaign, most of these students live in extended families often with 40 or more persons residing in the same compound. Students undoubtedly shared the information learned with these extended families.

As Almas noted to me, “We as educators are responsible to educate our students about the importance of polio eradication and all must cooperate in these efforts. School principals and teachers participated in these events with the support of parents and village elders. Students who had suffered from polio spoke sharing their experiences and challenges resulting from the effects of the disease.”

We started the AYC program back in 2008 with a grant to the La Jolla Golden Triangle Rotary Club Foundation from the US Department of State-Bureau of Educational and Cultural Affairs. AYC provides IT training and English language training in addition to teaching leadership skills and the importance of individual civic responsibility. Further, AYC students communicate with their peers in the U.S. and elsewhere through interactive Skype calls.

From an initial five public high schools in Jalalabad, Afghanistan, the program has expanded to thirteen classrooms supporting boys and girls in most of the public high schools throughout Jalalabad. It is now supported with private funding. Over 30,000 Afghan students have participated in the AYC program to date.

I am hoping future plans for the polio awareness campaign will involve students in another Jalalabad based program sponsored by my club known as Teaching English through Technology. This program also under the direction of Almas involves providing IT training and English language training to Nangarhar University students studying to be teachers.

Many of these students come from villages outside the large metropolitan areas. They typically return to their home communities during school breaks and eventually to teach after graduation. Through an expanded awareness campaign, they will be well positioned to carry the message regarding the importance of polio eradication back to their home communities.

Watch the World Polio Day Global Update and learn more about our efforts to eradicate polio.