Bridging the gap between Rotary’s programs for young leaders 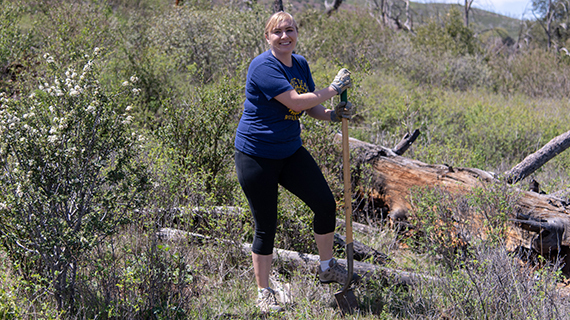 Jessie Case plants a tree with the Coronado Rotary Club.

My very first Interact project was picking up trash at a nearby lake and recreation area. It was so simple, yet I was so moved by the idea that if you wanted something to happen, you could take matters into your own hands and get it done. I am still moved by that feeling that comes from identifying a problem, finding a solution, and acting upon it.

I can’t say I initially joined the Rotary family for altruistic reasons. I was a sophomore in high school when I realized getting involved in something would help me get into a decent college. Our Interact club seemed like a good option since I liked the idea of giving back to my community and I had friends who were officers. I even have a distinct memory of those same friends throwing candy at us to convince us to sign up! But once I started attending service projects, it was all over – I was hooked.

Later, after attending a Rotary Youth Leadership Awards weekend, I realized that I needed Service Above Self to be a part of my everyday life. I planned to join a Rotaract club when I went off to college at the University of California, Santa Cruz. 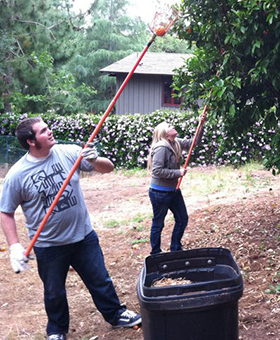 At the beginning of my first year as co-president of the Rotaract Club of Santa Cruz County in 2013, I attended a Rotaract conference in Berkeley. The Cal Rotaract club hosted a stay over for Interact students. Our officers and I left the conference so inspired by it that we convinced our much smaller club to do our own. We are one of the largest Interact districts in the world, yet practically none of them join Rotaract. We needed to do something about that.

I worked with the UC Santa Cruz, our Rotary and Interact districts, and our local Rotary clubs to host Interactors on our campus. Our first Interact with Rotaract Day brought eight Interactors to campus. Thirteen of our members guided them through team-building activities, workshops, a service project, and a campus tour. It was a small turnout but our main goal was to encourage these Interactors to pursue higher education and to continue a life of Service Above Self.

One of those eight actually decided to attend UC Santa Cruz and joined our Rotaract Club so I’d say it was a success. Now Interact with Rotaract Day is an annual event at their club with more applicants than they can accept.

I felt like I learned more from my leadership roles in Rotaract than from my college studies. Because of Rotaract, I sought out volunteer opportunities while I was home for the summer. I discovered the AmeriCorps Volunteer Infrastructure Program (VIP) which matches you with a nonprofit to build the capacity of the nonprofit’s volunteer program.

I became an AmeriCorps VIP in San Diego when I graduated and confirmed my passion to pursue a career in planning and leading volunteer projects. I now work full-time as program and marketing Coordinator at HandsOn San Diego, a local volunteer action center. I also serve as assistant District Rotaract Representative and director of finance and local service for the Pacific Beach Rotaract Club. I attended my first Rotary International Convention and Rotaract Preconvention this year in Toronto and aspire to be a Rotarian.