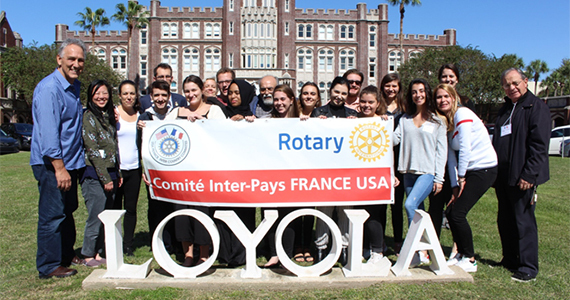 By Jean-Marie Poinsard, president of the France-USA Inter-Country Committee

In October, Rotary members from the city of Orléans, France, spent a week visiting Rotary clubs in New Orleans, Louisiana, USA, reinforcing the bonds of friendship and peace between our two countries. The idea for the trip actually began a few years earlier during the Atlanta Convention in 2016.

We had hosted a breakfast for convention attendees to promote the existence of our France-USA Inter-Country Committee. Like all Rotary Inter-Country committees, we bring together members in both countries to mentor youth, develop leaders, foster intercultural dialog, and promote peace.

The result was very positive, as three participants came to us with the idea of organizing an exchange with the cities of New Orleans and Orléans on the occasion of the 300th anniversary of the founding of New Orleans. My American counterpart on the committee, Bart, and I decided on two actions: to invite Rotary members from Orléans to meet their counterparts to create a twinning club partnership and to prepare a second youth seminar for peace, similar to one we held in Paris in 2016.

Rotary members in Orléans responded quickly and enthusiastically, and their support was reinforced when both cities officially twinned leading up to the anniversary. District Governor Alain Broussaud and 15 Rotary members from the six clubs in Orléans made the trip, exchanging addresses, maps, and banners with their American counterparts. A reverse trip is planned.

For the youth peace seminar, we partnered with Loyola University in New Orleans and plan to jointly publish the results in a booklet. We asked Rotary leaders in France to propose candidates from their country, and we selected eight, including several Rotaractors; two from each of the regions of Orléans, Bordeaux, Paris, and Nord. Our committee, helped by a few Rotary clubs, sponsored airline tickets for the French participants and New Orleans Rotary members hosted the students.

From the very outset, we had decided the seminar would be organized in cooperation with the Rotary Peace Center at Duke University and the University of North Carolina at Chapel Hill. Two of the directors for the seminar are former Peace Fellows from Duke, and the third is a doctoral student at the Polytechnic School who supervised the seminar we held in Paris.

The students held discussions and did exercises on democracy, immigration, inequality, intolerance, conflict, and security. A crisis-management simulation split the participants into two groups, and they had to resolve a situation involving riots, terrorist attacks, and hostages viewing the situation from different perspectives, those of national leaders and those of city leaders. The simulation gave them an opportunity to develop leadership and learn about the dynamics of crisis management, including that decisions can have consequences, sometimes dire.

We enjoyed the support of the Consulate of France in New Orleans. We also invited a former Rotary Peace Fellow and representative of the Institute for Economics and Peace, who talked to us about the work of this Institute, which is now partnering with Rotary.

The experience was summed up by one participant. “Coming home, I want to share this experience with all my friends to promote dialogue between people, especially in the period we live in, and to practice tolerance, to build a better world.”