Painting the way to peace 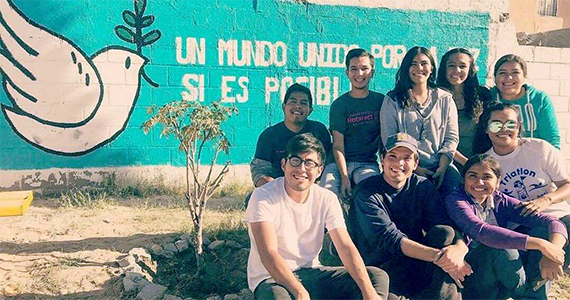 Members of the Rotaract Club of Juárez Integra in Cuidad Juárez, Chihuahua, Mexico, by one of the 10 murals they painted in public spaces.

I have always been concerned about the situation in my city. Cuidad Juarez is sadly known for a high crime rate and violence related to drug trafficking which creates an atmosphere of insecurity.

I wanted to learn more about how I could implement peace in my community, so I applied to participate in a workshop called A Stronger Mexico: Pillars of Positive Peace organized by the Institute for Economics and Peace. I learned that peace starts in small communities and that we cannot think about global peace if we do not work on it from the roots.

I live in a city with many abandoned and vandalized parks. My Rotaract club decided to create peace murals in each park to unite communities through art and rehabilitate these common spaces. We needed to recover public spaces so the community has a place to gather in a healthy environment and coexist in parks that are in good condition.

At first, we were afraid to make a single mural. We thought it was going to be expensive. And our neighbors were apathetic. Many people didn’t want to help because they didn’t get something in return. But we were determined. We secured sponsors and some club members also contributed. After we painted one mural, we saw how easy it was – nobody could stop us.

Little by little, more participants joined us. First, it was our neighbors, and then other organizations and even local artists offered to paint murals. They saw the results of what we were achieving and wanted to be a part of it.

It took us practically a year to paint 10 murals. (See a video of one project.) Each park’s mural has a different design, but they all focus on peace and leave a positive message.

What it takes to create lasting change

The project has had a huge impact on our community. Places that looked totally abandoned and vandalized have become meeting spaces for the community. We continue to rehabilitate parks and leave peace murals in each of them.

When I joined Rotaract I had a desire to do something concrete for the world. Thanks to the Positive Peace workshop, I learned a lot about how to use the tools at my disposal to achieve my goals. I learned that carrying out projects with lasting change doesn’t take much, only a firm conviction, clear objectives, and a good team.

I invite all young people to get involved in social projects, to be agents of change in your communities, and leave the world a better place than how we found it. Rotaract provides us with an impressive platform to bring our ideas to reality and to start generating innovative projects with great impact.

Yesenia Uribe is a member of the Rotaract Club of Juárez Integra in Cuidad Juárez, Chihuahua, Mexico. She is a social entrepreneur, concerned about the current situation in her country and her city.