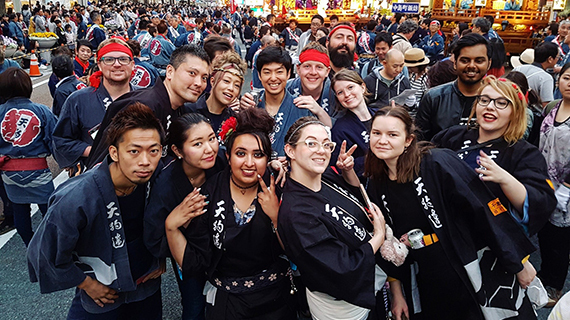 Farrah Hasnain and her friends at the Hamamatsu Festival. 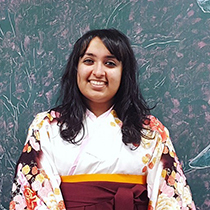 My aim is to change my students’ perception of the U.S. There is a hegemony of whiteness in English language teaching, and I want to represent how diverse and multifaceted the American identity truly is.”

When I wrote this to enter The JET Program as a high school English teacher in 2014, I was not aware of how much this would impact my life in Japan. As I began to crack open textbooks, wake up sleepy students, and navigate the enigma that was the old-school Japanese copy machine, I slowly built a consciousness for the parallels that thrived in the rice fields and smoky factories of Hamamatsu, Shizuoka.

Hamamatsu has one of the largest immigrant populations in Japan. As of 2018, there are approximately 9,200 Brazilian residents. Other residents hail from Peru, Indonesia, Vietnam, and the Philippines, and are migrant workers.

After moving to my Japanese hometown, I learned that Japan had a long history of migration between Brazil and Peru, dating back to as early as 1873. However, although many of my students and friends carried rich multicultural identities, they often saw their non-Japanese roots as a hindrance instead of an advantage. Some of my students would hide their mixed heritage if they physically passed as Japanese, and most of my returnee and bilingual/trilingual students would downplay their English proficiency to avoid standing out.

I wanted to find a way to bridge the gap between who they were and what their communities pressured them to be, and I was able to start this conversation with them. Instead of assigning academic papers or chapter books that only held text alone, I showed them Hafu, a documentary that followed five families navigating the intricacies of their mixed-race identities in a Japanese context. Hearing the voices and seeing the faces of intercultural families can help students realize how real and relevant minority experiences are.

As I showed the film to my students, I noticed that every one of them was engaged, though their written reflections were louder than their in-class discussions. In Japanese classrooms, especially at public schools, one of the major challenges with discussing social issues is giving the student the agency and confidence to express their honest opinions, even in their native language. By the end of the term, most of my students were able to empathize with how their mixed-race peers had felt as minorities, and some even revealed that they were Zainichi Gaikoku-jin (non Japanese people living in Japan), thanks to seeing someone who shared the same complexities on-screen.

This film also led me to discover the existence of the Rotary Peace Fellowship. Megumi Nishikura, one of the directors of the film, talked about her experience as a peace fellow and how it inspired her to create a documentary based on her personal experiences, which were elusive to find at the time. As I listened to her walk the audience through her trials and revelations as a hafu (a mixed race person in Japan), I felt deeply inclined to help the minority communities that have shown me how diverse and complex the Japanese diaspora truly is.

I personally knew many people from these communities, and they would share their stories of reconciling their identities with me. In Hamamatsu, many people would often assume that I was Brazilian or Peruvian Nikkei (a Japanese emigrant), and would treat me better when I revealed that I was actually American. I wanted to shine a light on a little-researched topic that deserves representation in academia: the experiences of the Brazilian Nikkei and their children (Sansei – third generation emigrants), who are now in their early 20s.

Fast-forward to 2020: I entered International Christian University, the same university that Nishikura completed the fellowship in. My thesis will be a comparative ethnography of Brazilian Sansei who attended Japanese schools vs. those who attended Brazilian schools in Japan. I hope to continue interviewing these communities and sharing their stories on larger platforms. As YouTube channels including Asian Boss and viral commercials like Nike’s rapidly grow, I believe that this discourse on multicultural Japanese identities can transcend into acceptance in the future.

Learn how to apply for a Rotary Peace Fellowship