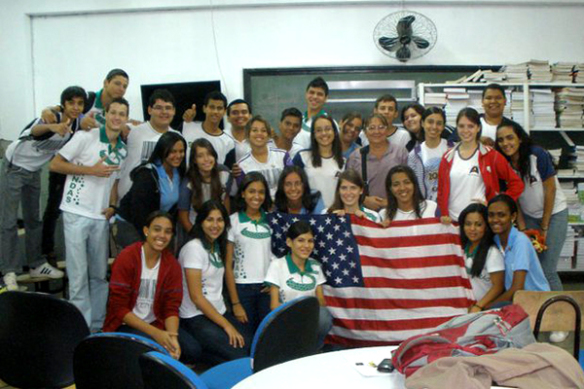 Marie Tornquist and her Brazilian classmates during her Rotary Youth Exchange

On the first day of my Rotary Youth Exchange orientation in a Minneapolis suburb, I remember being confused about the nationality of my country officer. She kept referring to herself as Brazilian, saying things like, “In Brazil we eat a lot of rice and beans,” and, “We (Brazilians) are very open people.” She also referred to her Brazilian host families as “my brother, Eduardo,” “my nieces and nephews,” etc. I wondered if she had somehow been placed with a host family that was a distant relative. After a while I realized that ever since her exchange, she has continued to identify with the Brazilian culture while at the same time living in the U.S. and maintaining her identity as an American. 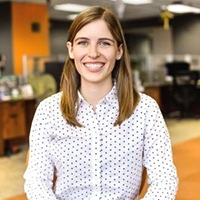 A few months before my exchange, I received my host family and city assignment. I discovered I would be going to the state of Mato Grosso, to the small town of Rondonopolis, right in the center of South America, as far as you can get from Brazil’s beaches and samba rhythms. The closest other exchange student would be in another town six hours away by bus.

During the first three months of my exchange, I focused intensely on learning the language and everything I could about the culture of my new home. At the six-month mark, I was already beginning to dream in Portuguese. I had also gained a solid group of friends with whom I shared common interests and felt that I could talk to openly without being seen as “the American.” Having limited access to my native language and culture forced me to integrate into local society and rely on the people around me for support.

While traveling as a tourist or even as a student on a traditional study abroad program, people tend to gravitate towards others of similar backgrounds or hold on to their habits and way of thinking. Unless you are fully immersed in your host culture with little contact with your native culture, you will always maintain an “us vs. them” mentality. I believe you can only become a global citizen when you start identifying yourself as one of “them.” Going on an exchange lends the perfect opportunity to break through nationalist barriers and truly walk in the shoes of someone from a culture you may have once thought foreign.

Since my year in Brazil, I have continued to study different languages and cultures. Being able to relate to the people around me is what has helped me to be successful and thrive in many places around the world. My greatest challenge has been living and working in China, where being Caucasian I’ll never truly blend in. At times this can be frustrating and mentally exhausting but there are still plenty of days when I feel more connected to Chinese culture than to the U.S.

I’ve gotten used to cultural expectations quite different from what I grew up with. The ability I gained as an exchange student to adapt to different worlds has served me well, and for the most part I have come to enjoy the challenges of cross-cultural communication and forced change. In a world that increasingly pits “us vs. them,” I believe that developing an understanding and appreciation of what once seemed strange and unfamiliar is the key to global citizenship, world peace, and progress. I feel very fortunate to have embarked on this journey while on a Rotary Youth Exchange.